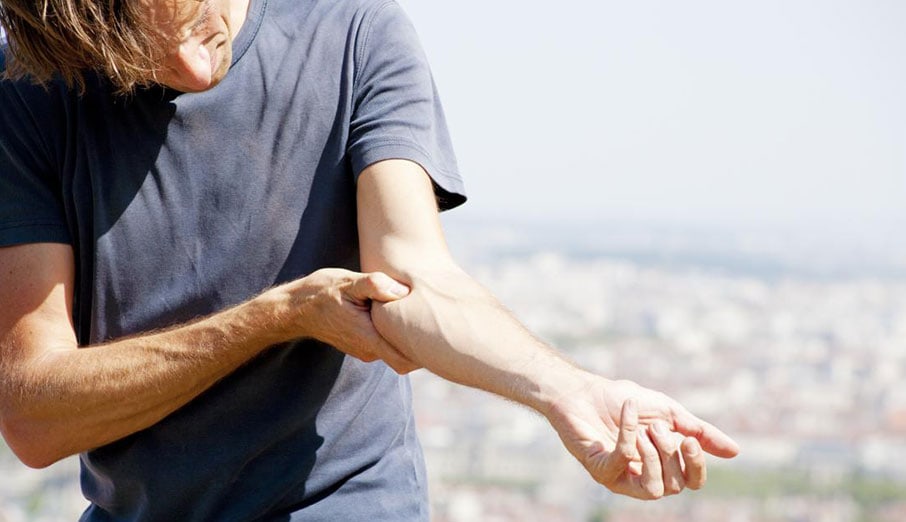 I have seen, literally, zero people with golfer’s elbow who actually play golf (I have seen golfers that are suffering from tennis elbow, however).

Golfer’s elbow is also known as medial epicondylalgia. This literally translates to “pain on the inside of the elbow”. The name “golfer’s elbow” comes from a mistaken understanding of what usually causes this pain, that it results from repeated strain on the ligament on the inside of the elbow, for example from striking the ground during a golf swing.

Golfer’s elbow is actually a tendinopathy, similar to Achilles tendinopathy or patellar tendinopathy. In the case of golfer’s elbow, it’s a tendinopathy of the muscles that bend the wrist and fingers. These muscles all share one tendon which attaches to the inside of the elbow. These muscles (as well as the muscles that extend the wrist and fingers) are used when gripping objects, so repeated or sustained gripping tasks, especially of heavy objects, places more load through these tendons. Tendinopathies arise when more load is cumulatively placed on a tendon than what it is able to deal with.

The treatment for golfer’s elbow, like for other tendons, involves reducing load on the tendon to allow pain to settle, and then to assist the tendon to adapt to be able to deal with greater load. This treatment can involve massage, joint mobilisations, ultrasound, and taping or bracing. Most important to the treatment is a graduated strengthening program to strengthen the muscle and tendon complex to be able to cope with greater loads.

If you’re suffering elbow pain, come and see our physiotherapist in Aubin Grove to get it treated today!