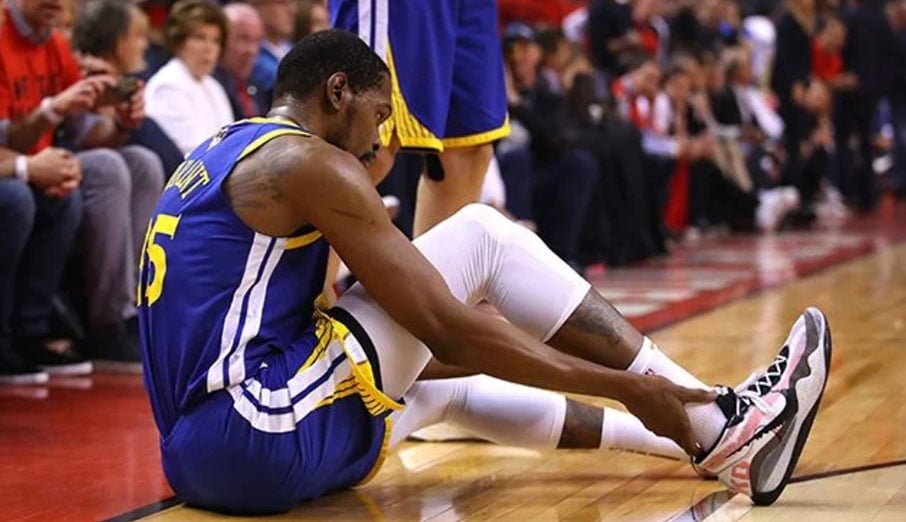 Anyone who watched game 5 of the NBA finals a couple of days ago would have seen Golden State Warriors’ star Kevin Durant rupture his Achilles tendon in real team. I won’t post the video here, but if you’re interested, a simple YouTube search should show it up. So what is the Achilles tendon? How does it rupture? and How is it treated if you do rupture it?

The Achilles tendon is so named because of the story of Achilles in Greek mythology, who’s mother dipped him in the River Styx when he was a baby to make him invincible. However she held him by the heel, and so his heel did not come into contact with the water and was therefore his one vulnerable spot. Achilles then died by being shot in the heel with an arrow.

The Achilles tendon can undergo a degenerative process, where it is progressively over time exposed to more load than it is able to deal with. Due to being a tendon, which has a poor supply, the Achilles does not have a good capacity for healing. The body’s response to the progressive overloading of the tendon actually makes the tendon weaker.

Healthy tendon is strong, fibrous tissue, composed of collage fibres which are densely packed together and run straight up and down the tendon. This composition is ideal for dealing with the forces which go through the Achilles tendon. As the tendon degenerates, the fibres become more disordered and seperated. For this reason, an Achilles tendon which is very degenerated will appear thicker than a healthy tendon (and often has a particularly thick nodule in it). It’s important to note that this thickened tendon is actually weaker than a thinner, healthier tendon, unlike muscles which tend to be stronger when they are larger.

The weakening of the Achilles tendon as a result of the degenerative process means that it may then rupture when exposed to a greater force than it is capable of dealing with (often during running or jumping activities). As an Achilles tendon ruptures it snaps and recoils up into the leg as the calf muscles are no longer anchored to the foot. This is what you can see happening in Kevin Durant’s leg if you do look up that YouTube video!

Achilles tendon ruptures are usually repaired by surgery, though sometimes they are managed conservatively and people are still able to return to sport. Whether repaired surgically or conservatively, Achilles tendon rupture is associated with a long rehab and recovery period. Rehab involves gradual return of movement at the ankle and strength of the calf, while also maintaining strength and function of structures in the rest of the lower limb. Exercises involving quicker change from lengthening to shortening of the calf and Achilles can then be gradually introduced in preparation for return to sport.

Return to sport typically takes around one year, while athletes frequently have reduced performance in their first year following return to sport, before their performance begins to return towards pre-injury levels.

Performing calf strengthening exercises with good control of the eccentric (lowering) phase is helpful in stimulating the fibres of the Achilles tendon to align themselves to better cope with forces through the tendon, and is generally helpful in slowing the process of Achilles degeneration.

If you’re having issues with your Achilles tendon, see our physiotherapist in Aubin Grove today!